THE YEAR OF BLOGGING BIBLICALLY: DAY 105 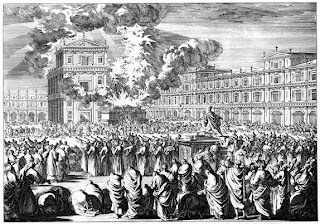 The temple is complete. Solomon assembles the people. The ark of the covenant is brought up from the section of Jerusalem called "the city of David" and is placed, permanently, in the new worship facility. As happened at the dedication of the tabernacle in Exodus 40, the cloud of YHWH's glory descends upon the temple.

At 8:7 there is mention that the poles of the ark are still visible in the temple "to this day." This would be an important clue toward dating the composition of 1 Kings were one so inclined.

At the beginning of chapter 8 it is said that Solomon offers innumerable animal sacrifices. At the end of the chapter he adds another 22,000 oxen and 120,000 sheep to the total. The festival last a week, if your believe the Septuagint, or two, if you take the Masoretic text's word for it.

Solomon addresses the people, reminding them of the history behind the construction of the temple. Then he gets to his knees and offers a lengthy prayer. Solomon recognizes that the God of heaven and earth cannot be contained in a building. this is an expansive view of YHWH not shared by all of the Scriptures. Solomon asks YHWH's forgiveness for sinners, both individuals and Israel as a community, who turn toward the temple. Interestingly, he also prays for foreigners who turn toward YHWH's temple. The prayer ends with a petition for those who will be exiled to foreign lands. In narrative time this is a prescient request. It may also be another important clue as to the date of 1 Kings.

In chapter 9 YHWH appears to Solomon for a second time. (The first time was back in chapter 3). God issues a trenchant warning: Have no other gods or YHWH will abandon the temple. Solomon, and then all of Israel, will go after other gods. The temple will be destroyed.

There is an odd event. Solomon gives his old friend King Hiram of Tyre a gift of 20 cities as a return for his help in building the temple. Hiram is not happy with the gift. The cities of Northeast Galilee must not have amounted to much. Hiram calls the area "Cabul" which means something like "good for nothing."

My concerns that Solomon conscripted Israelites into forced labor are allayed at 9:20 ff.  where we read that Solomon only enslaved the Canaanites who remained in the land.

At 9:24 we learn that Solomon built the Millo which seems odd since it was mentioned in the story of David at 2 Samuel 5:9. Maybe he rebuilt it? Maybe the author got the facts confused?

At the end of chapter 9 we learn that Solomon has gone into the shipping business with Hiram of Tyre. It is profitable. It has to be profitable to support Solomon's lavish lifestyle.