THE YEAR OF BLOGGING BIBLICALLY: DAY 109 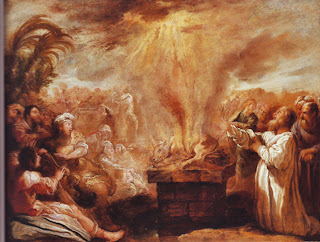 Senator Barry Goldwater famously said, "Extremism in the defense of liberty is no vice." The prophet Elijah seems to feel the same way about the defense of Yahwism. Ancient Yahwism, the worship of YHWH is the distant ancestor, red in tooth and claw, of modern Judaism,Christianity, and Islam. These three monotheistic religions still have extremists among their adherents though, I hope, most of us have evolved from the days of Elijah.

Parts of the Bible are belligerent,  exclusivistic, and absolutist. Other parts are irenic, inclusivistic, and welcoming. I will let you decide for yourself to which camp this passage belongs and whether that is a good thing. I believe that the Bible invites us into a conversation about God. In open conversation, we are free to disagree.
In 1 Kings 18 Elijah returns to Israel to announce the end of a three year drought. He has a conversation with Obadiah, King Ahab's chief of staff. Obadiah sheltered 100 prophets of YHWH from queen Jezebel. Long story short, Ahab comes to meet Elijah on Mt. Carmel. Notice who holds power here. On the mountain, in the presence of the assembled Israelites, Elijah, YHWH's lone prophet (what happened to the 100 Obadiah hid?) challenges the 850 pagan prophets of Baal and Asherah to a contest.

The terms are simple: two altars are built. Two sacrifices are prepared. The true deity can send fire to claim the offering.

The pagans go first. They pray, do a limping dance, and mutilate themselves to no avail. Elijah mocks.

When Elijah's turn comes, he ups the ante by having his altar soaked with water. Where he got all that water after 3 years of drought goes unexplained. Elijah prays briefly. Fire comes down. Contest over.

Elijah is not a magnanimous victor. He has the people, now all filled with YHWH fever, kill the 850 pagan prophets. It had to be a bloodbath. 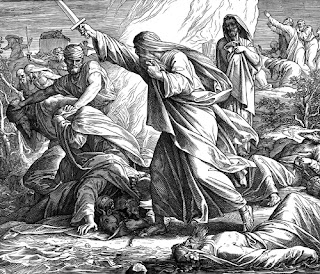 After a bit of business which sets Ahab to feasting and has Elijah bowing and watching, a rain cloud forms. Ahab goes by chariot to Jezreel, 17 miles from Mt. Carmel. Elijah, on foot, outruns him.

In chapter 19, Jezebel learns the fate of her 850 pet prophets. Angry, she vows to have Elijah killed. Elijah, in spite of the recent miraculous victory, goes on the lam.

In a story that loudly echoes Moses and the Exodus, Elijah heads for a theophany on Mt. Horeb, a.k.a. Sinai. He travels 40(!) days and is sustained with miraculous food in the desert. Finally at Horeb, he complains that he is the last faithful servant of YHWH (Again, Obadiah? The hundred hidden prophets?).

In an incredibly cool, mystical moment in an otherwise bloody and action-packed tale, YHWH reveals himself to Elijah, not in fire, wind, or earthquake, but in a still, small voice, a gentle whisper, a vapor, a silence.

YHWH assures Elijah that his job isn't done. There are kings to anoint, a successor to inaugurate, and blood left to spill. (The promised slaughter by Hazael, Jehu, and Elisha never really materializes). There are 7,000 faithful Yahwists left in Israel.

Elijah throws his mantle on Elisha and an idiom is born. Elisha, apparently a wealthy farmer (12 yokes of oxen plowing!) breaks all ties with his past and joins Elijah.

Chapter 20 tells of war between king Ben-hadad of Aram and Ahab. There are two nameless prophets in this chapter. The first advises Ahab on tactics. YHWH grants Ahab victory not once, but twice. The Arameans misunderstand and underestimate--they misunderestimate--YHWH. The language of ancient international politics and warfare is kind of fun to read.

The second nameless prophet, in one of those great enacted parables, convicts Ahab of doing wrong in making up with Ben-hadad after the fighting ceased. Should've killed him. YHWH is not a gracious winner in these chapters.

By the way, if a prophet ever asks you to hit him...pop him good.