THE YEAR OF BLOGGING BIBLICALLY: DAY 114

Okay, I goofed. You caught me. When I blogged about 1 Kings 18, where Elijah was sent to anoint Hazael as king of Aram, Jehu as king of Israel, and Elisha as his prophetic successor, I said that the threatened bloodbath by these three never materializes. I don't know what I was smoking that day but, boy howdy, I blew it. I was at least 2/3 wrong. Hazael and Jehu are responsible for the spillage of red vital fluid by the bucketful. I don't think the same can be said of Elisha, but I don't want to get ahead of myself again.

In 2 Kings 10, Elisha sends one of his young colleagues to (re)anoint Jehu as king of the northern kingdom, Israel. This is assuming that Elijah did previously anoint Jehu as he was commanded. That event was not narrated.

Arguably there isa coregency at this time. Jehu is anointed king while Joram still occupies the throne. If this is a coregency, it is short-lived. Jehu musters an army and marches toward Jezreel where Joram and king Ahaziah of Judah are hanging out. The two kings come out of the city. Omitting a lot of detail (read it for yourself) Jehu kills them both. Elijah's prophecy from 1 Kings 18 comes to pass.

Next Jehu marches into Jezreel. Jezebel, Ahab's evil queen, dolls herself up and, from an upper-story window calls Jehu "Zimri." Recall that in 1 Kings 15 it was Zimri who assassinated king Elah of Israel and then ruled for one week before being overthrown by Omri. At Jehu's word, Jezebel's own eunuchs toss her out the window. Her corpse is left where it fell while Jehu has a bite to eat. After lunch, Jezebel's body is found to have been consumed by dogs. More of Elijah's prophecy from 1 Kings 18 is fulfilled. 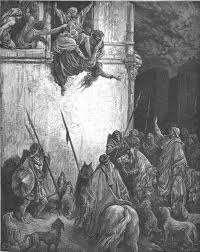 In chapter 10, Jehu orders the death of Ahab's 70 remaining descendants. Their heads are stacked in two piles. No one of Ahab's family survives. Still more prophecy is fulfilled.

Then Jehu slaughters some of Ahaziah's kin. He makes friends with Jehonadab, a Rechabite. In Jeremiah 35 we will see that the Rehchabites are devoutYahwists who have no tolerance for things Canaanite.

After the execution of Ahaziah's family, Jehu moves on to the capitol city, Samaria. There he assembles the priests of Baal on the pretext of offering a sacrifice to their god. He kills them and turns their temple into a latrine. YHWH is pleased.

Jehu's has purified Israel's worship. Well, mostly. He doesn't remove Jeroboam's golden calves. During his 28 year reign, the Aramaens chip away at Israel's borders reducing the size of Jehu's territory.

Okay, I should probably take a second to note just how repugnant all of this is. Jehu is a fanatic. In modern parlance his actions would be condemned as ethnic cleansing. While the author(s) of 2 Kings might approve of Jehu's deeds, other writers of the Hebrew Bible would not. I do not. I don't believe that God does.

In chapter 11, we are taken back to Judah where Athaliah, the mother of Ahaziah, rather than mourning her son's death, takes advantage of the situation. She tries to kill off the entire royal family but one infant, a boy named Joash is hidden from her. Athaliah becomes queen regnant of Judah. When the boy is 7 years old, the priest Jehoaida brings him out of hiding, has Athaliah killed, and puts Joash on the throne. The places of pagan worship are destroyed. For the time being, at least, Baal worship has been rooted out from Israel and Judah.

At what cost is religious purity purchased?