THE YEAR OF BLOGGING BIBLICALLY: DAY 112 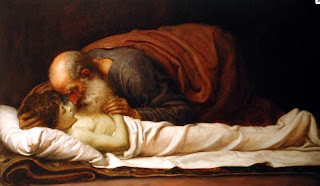 The acorn does not fall far from the tree. Elisha is a lot like his predecessor, and that is the point of much of 2 Kings 4. The chapter opens with a story in which Elisha performs a miracle of multiplication for a widow, much as Elijah did in 1 Kings 17. Then Elisha raises a bereaved woman's only son from the dead, again much as Elijah did in 1 Kings 17.

The story of the Shunnamite woman's son is full of pathos and drama. I remember hearing it read in a church service at a university chapel some years ago. The lector was a drama student who, I'm sorry to say, chewed the scenery a bit. I can still hear his stentorian voice emphasizing and enunciating every word. "And the lad sneezed! (Pause for effect). Seven times!" It took a great effort of will not to break out laughing.

Elisha is also a lot like Moses. So, as we noted, was Elijah. In Deuteronomy 18 Moses promised that there would be a prophet like himself.  As Moses fed the Israelites in the wilderness, so Elisha feeds a company of 100 prophets. Jesus will also perform miracles of feeding in the Gospels.

Other biblical themes play through this chapter as well. The Shunnamite woman's inability to have children is reminiscent of the stories of Sarah, Hannah, and other "barren" women.

Chapter 5 is taken up by the story of Naaman, the general of Aram's army, a powerful man who is brought low by a skin disease. Repeatedly, and comically, the powerful Naaman is humbled in this narrative. He takes advice from a slave girl. Elisha won't even come out to meet him. He is sent to wash in the Jordan, a river he thinks is inferior to his home waterways. In the end he is both cleansed of his leprosy and converted to the worship of Israel's God. Elisha seemingly grants Naaman permission to participate in the worship of Rimmon (the god of Aram?) as a political expediency.

Although Elisha will not accept payment for Naaman's healing, his servant Gehazi pursues Naaman to request gifts. As a result, Gehazi is struck with an incurable leprosy that will pass also to his descendants.

Elisha is a non-profit prophet. 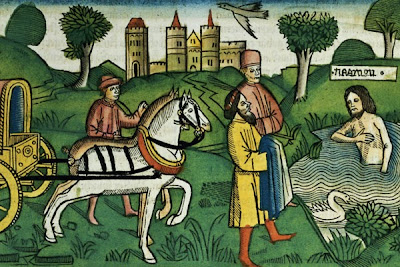