THE YEAR OF BLOGGING BIBLICALLY: DAY 38

Leviticus 17-26 are sometimes called the "Holiness Code." The instructions in these chapters teach the Israelites how to be holy, set apart for God. Chapter 19 contains various laws, many of which are repeated from earlier parts of the Pentateuch.

Some of the instructions on how to be holy are based in concern for others. Verses 9-10 tell the Israelites to leave a little of their harvest in the field so that the poor and foreigners will have something to eat. Verse 14 says "Don't curse the deaf or trip the blind." (My paraphrase). Unable to hear a curse, the deaf could not defend against it. Putting a stumbling block in front of a blind person is just cruel.

Verses 23-24 are an interesting agricultural instruction. Fruit trees are not to be harvested for three years after planting. In the fourth year, the harvest is given to the Lord--a literal first fruits offering. In the fifth year, the one who planted it can enjoy the fruit.

Verse 27 instructs the Israelite men not to cut the hair on the sides of their heads. This accounts for the curly sidelocks that Orthodox Jewish men wear today.

Verse 28 prohibits cutting one's flesh in mourning for the dead or tattooing the flesh. I suspect that the tattoo thing is also about mourning. It certainly lends irony to this, however: 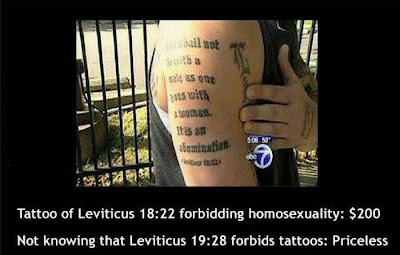 Verse 31 is a law against consulting a medium. This will be an important point in the story of Saul in 1 Samuel 28.

Chapter 20 specifies punishments for infractions of the Laws listed previously. The Bible that I'm reading heads this chapter "Punishments for Sins." Sin is a little misleading here, however. I've noted before that sin and crime are not separate categories in Leviticus.

Sacrificing a child to Molech is punishable by death. The unclean sexual acts listed in chapter 18 are mostly punishable by death. Having sex during a woman's menstrual period may be an exception. It only calls for the violators to be "cut off," though, as I noted in an earlier post, this may be a euphemism for death.

Mediums and those who consult them are to be put to death.

The regulations in chapter 21 are addressed specifically to the priests of Israel. When Nadab and Elihu were struck dead their father, Aaron, was not permitted to mourn. Now the priests may mourn for their close relatives, but not for their in-laws or  more distant relations.

Members of the priestly family who have physical defects are excluded from service in the Tabernacle (and later the Temple). They are still allowed to eat sacrificial meat. YHWH just doesn't seem to want defective things in his Temple.

As a far-sighted man with a broken left middle finger, I guess that would leave me out. Still, when the Ethiopian eunuch asked the Apostle Philip "What is to prevent me from being baptized?" Philip did not point out the obvious "defect." He just baptized the guy. (Acts 8:26 ff.). As a Christian I'm not banking on any holiness of my own. I'm counting on Jesus to be my holiness.