THE YEAR OF BLOGGING BIBLICALLY: DAY 99 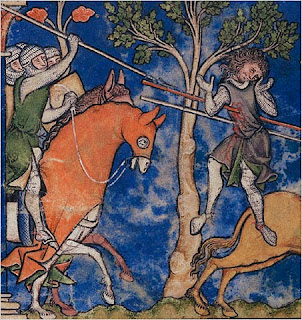 Biblical narrative is driven by action and dialogue. Emotion and motivation are mostly unreported and have to be inferred.

In 2 Samuel 16, we find David at a low point. As his rebel son Absalom advances on Jerusalem, David has evacuated the capital city leaving behind 10 concubines to look after his palace. In spite of the circumstances, David continues to show loyalty to his friends and submission to YHWH.

Learning that Mephibosheth, the disabled grandson of king Saul, has remained in Jerusalem in hopes of regaining the throne, David grants all of Mephibosheth's possessions to Mephibosheth's servant Ziba.

As he travels on, David meets a kinsman of Saul's, a man named Shimei who calls down curses on David and pelts him with stones. Abishai, one of David's loyal commanders, offers to end the annoyance by killing Shimei. David grants that Shimei may have legitimate grievances.

At the Jordan river, David and his entourage finally rest.

Meanwhile back in Jerusalem, David's spy Hushai ingratiates himself to Absalom. David's former adviser Ahithophel encourages Absalom to make a spectacle of having sex with David's concubines. In chapter 3, concerning the incident between Abner and Ishboseth, I noted that sleeping with another man's wife was a way of asserting superiority over that man. This is exactly what Absalom does. Concerning  David's dalliance with Bathsheba, the prophet Nathan had said,


Thus says the LORD: I will raise up trouble against you from within your own house; and I will take your wives before your eyes, and give them to your neighbor, and he shall lie with your wives in the sight of this very sun. (2 Samuel 12:11)

In chapter 17 Ahithophel gives Absalom advice on how to defeat David. David's spy, Hushai, gives contrary advice and Absalom chooses to follow it. Hushai then secretly sends word to David on how to escape. There's a bit of adventure as the messengers are pursued and have to hide in a well.

In chapter 18 the armies of David and Absalom engage in battle. David, for his own safety, remains in the city of Mahanaim. Absalom's forces are defeated. Absalom himself is killed, a victim of his luxurious hair. When he hears the news, David is inconsolable:


Biblical narrative is driven by action and dialogue. Sometimes the emotion is easy to infer.