THE YEAR OF BLOGGING BIBLICALLY: DAY 86 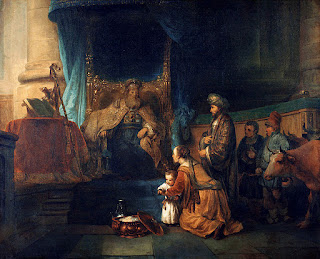 After the pleasant interruption of the story of Ruth, the first book of Samuel returns us to the larger narrative. You will recall that everything had gone ker-flooey in Israel at the end of the book of Judges. Chaos reigned. Inter-tribal warfare was rampant. Dogs and cats were living together...

No, wait. Scratch that last bit. That was from Ghostbusters.

Samuel will be the last judge of Israel. He will serve as a priest and act as a prophet. He will anoint the nation's first two kings.

First off, we meet Samuel's parents, Elkanah and Hannah. In a familiar trope, Hannah is the beloved but barren wife. She desperately wants children. Elkanah's other wife, Peninnah, mocks Hannah mercilessly. (An extra-biblical tradition gives the name Anna, a variant of Hannah, to the mother of the virgin Mary).

The tabernacle, the tent that served as a traveling temple during the wilderness years, is now parked semi-permanently at Shiloh. Eli is an overweight, elderly man, a decent sort, but an ineffectual father. His two sons, Phinehas and Hophni, are the priests. They misuse their position egregiously.

When Elkanah's family makes one of their annual pilgrimages to Shiloh, Eli finds Hannah praying and pronounces a blessing over her. Shortly after she returns home, Hannah becomes pregnant. Her firstborn son, Samuel. is dedicated to YHWH in a most literal way. Once he is weaned the boy is given to Eli to raise in the tabernacle. Each year Hannah brings Samuel a little linen ephod, a garment that suggests the boy is serving in a priestly capacity at a tender age.

Intertextuality is the word of the day. The story of  Samuel's birth and childhood have echoes of the stories of the Patriarchs. When we get to the early chapters of Luke, we'll find that the narrative of Jesus' birth is patterned, at least in part, on these chapters of 1 Samuel.

The second chapter begins with a song that Hannah sings, expressing her joy at the birth of a son. It tells of God's sovereignty and of amazing reversals that YHWH causes: the lowly are lifted up, the proud are humbled. It is a model followed by Mary, the mother of Jesus, in Luke 1:46 ff. (the "Magnificat"). 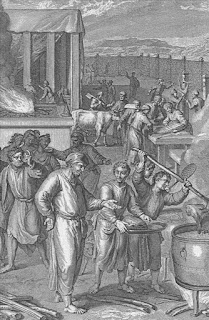 Verses 12 ff. detail the indiscretions of Hophni and Phinehas. Besides filching the best parts of the sacrifices,  they are having sex with the women who "serve at the entrance to the Tent of Meeting." Who are these women? Just what services do they perform? Is this temple prostitution (a common practice among Israel's pagan neighbors)? Are the women rightfully there and wrongly used? Or is their presence another indication of just how bad things have gotten in Israel?

In 2:27 ff.  an anonymous prophet comes by to pronounce doom upon Phinehas and Hophni. He must be a true prophet as his words will come to pass.

Chapter 3 is usually titled something like the "Call of Samuel." I prefer to think of it as Samuel's first encounter with YHWH. Samuel isn't really commissioned to do anything. He simply hears the word of the Lord, a word that he will repeat unwillingly to Eli. Samuel's response to YHWH's summons is the same as Abraham's, "Hineni.Here I am." Samuel, at first, says his "Hinenis" to the wrong person, Eli. YHWH's message is more bad news for Eli who accepts the Lord's will with faith. Or is it resignation? Whatever it is, it will echo in Mary's response to the news that she, though virgin, will become pregnant in Luke 1:38.

A final intertextual echo is found in 1 Samuel 3:19 which describes the boy growing up and will be echoed in Luke 2:40.