THE YEAR OF BLOGGING BIBLICALLY: DAY 94 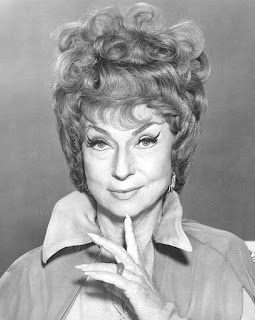 Remember the TV show Bewitched? All of the witches names ended with the letter "A." Samantha, Serena, Agatha.... It kind of robbed the whole "is-baby-Tabitha-a-witch-or-not?" plot of all its suspense for anyone who was paying attention.

The show, I have heard, was the target of criticism from certain Christian groups who objected to its positive treatment of witches. Exodus 22:18 says "Thou shalt not suffer a witch to live," after all. Agnes Moorehead, who played Samantha's meddling mother, was the daughter of a Presbyterian minister and, I've heard, a committed Christian throughout her life. She pooh-poohed the criticism. Bewitched was all fiction, fantasy, and entertainment.

I mention this because Moorehead's character name was "Endora." Endor is a biblical place name, the home of a famous witch. Add the "A" suffix for a witch's name and there you have the origin of the character's moniker.

"Witch" was what the King James Version called the woman of Endor with whom Saul consulted. Modern translations seem to prefer "medium." Personally I think "necromancer" might be a more accurate descriptor. She conjured the dead. Technically, this was illegal. Beside the Exodus 22:28 thing, Saul had "cut off" all the witches, or mediums, or necromancers from the land.

Poor Saul was desperate. The Philistine army was massing and YHWH wasn't talking to him. So he convinced the woman of Endor to summon up for him the spirit of Samuel. Apparently the author of this book envisioned the afterlife as a shadowy existence. Within the narrative, summoning the dead is a real possibility, but frowned upon. YHWH doesn't want living people messing with the realm of the dead. 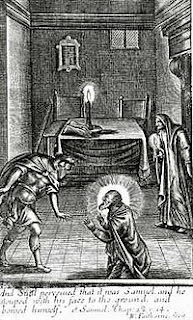 The dead don't seem to keen on being messed with either. At least Samuel doesn't. He grouses at Saul for disturbing him and then delivers the bad news: "You and your sons will be joining me tomorrow."

I feel sorry for Saul. YHWH didn't want Israel to have a king anyway. When they insisted, YHWH tapped Saul for the job. He was a screw-up from the first. YHWH rejected him, and now he's going to die.

In the meantime (chapter 29), YHWH's favorite, David is marching with the Philistines. Would he actually go to war against his own people? It seems unlikely but we'll never know for sure. Some of the Philistine commanders, suspecting David's loyalties, insist that he go back home to Ziklag.

While David was away, Amalekites raided Ziklag, taking everyone there (including David's wives) captive, looting what they could, and setting the city afire. David's army of 600 go after the Amalekites. Two hundred of them succumb to exhaustion and are left behind. The 400 who remain rout the Amalekites and recover everything. David insists that those who fought share the spoils of war with those who were left back. He's noble like that. He also sends gifts to the elders of Judah.

We rejoin Saul in chapter 31. In battle with the Philistines, his three sons are killed. When he is critically wounded, he ends his life by falling on his own sword. His body is mutilated and displayed by the Philistines, but brave Israelites recover it.

Like I said, I feel sorry for Saul. He was in over his head from the first. 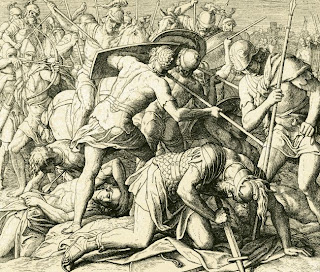