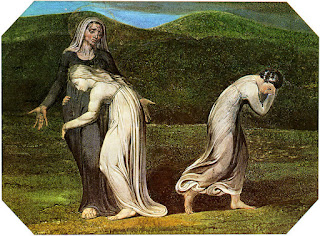 People of faith who grant authority to the Bible invariably privilege some portions of their Scripture above others. Everyone has a "canon within the canon." Even the Fundamentalist who says that the Scriptures all carry equal weight grants that Mark 7:19 (where Jesus "declared all foods clean") trumps Leviticus 11:10 (which declares shellfish an "abomination").

So, communities of faith make some parts of Scripture central to their theology. Those central parts provide an interpretive lens through which the rest of Scripture is read (or ignored). It might be the Abrahamic covenant, the story of the Exodus, the cross and resurrection of Jesus, the writings of Paul, or apocalyptic end times prophecy. Whatever is given place of prominence colors the way that we read the entire Bible and shapes the life of a faith community.

Interpreters approach the book of Ruth in a variety of ways. Most seem to find it a charming, romantic story. Some treat it as a folktale; others as a bald recitation of historical fact. Everyone can draw some message from it. But no one--as far as I am aware--absolutely no one makes Ruth the center of the Scripture.

That realization brings me to a thought experiment. What would a community of faith that made Ruth the heart of its canon look like? If Ruth were the interpretive lens through which they read the rest of the Bible, what would their theology and practice be?

For example, since the book of Ruth is named for a woman, and since women (Naomi and Ruth) are its protagonists, would women be given a more prominent place in this hypothetical community? It is nice to think so, but I'm afraid that the answer is "no." The book of Ruth reflects the patriarchal assumptions of the culture from which it came. Women in this book are reliant upon men. Boaz is the knight in shining armor who rescues Ruth and Naomi.

Then there is the question of the Law. Christians tend to treat the Law as either a cudgel to keep the faithful in line or a goad to prompt sore consciences to repentance. In the book of Ruth, the Law is a positive good, a tool, if you will, to the Gospel. It is through the laws commanding gleaning and levirate marriage that Ruth and Naomi are first kept alive and then lifted to a state of happiness. (I should point out that this is, to my understanding, a Jewish approach to the Law). A community based on the book of Ruth would likely see the Law as instruction to provide for those in need.

Related to the question of the Law, is a point about premarital sex. Most faith communities frown on sex before marriage. Some Christian groups in particular put a great stress on sexual "purity." But something happened between Ruth and Boaz on the threshing floor that night. The author of Ruth is a bit coy, but whatever happened delighted Boaz. No one else seems to think it amiss. Granted this is a case of a woman in a patriarchal culture using her sexual wiles to assure her future but, within the narrative world of Ruth, there is no condemnation for what happened. Would a community that used Ruth as its interpretive lens be more permissive about premarital sex? Maybe so.

How would my hypothetical community define "salvation?" For many Christians salvation means having your ticket punched for a ride on the heaven train. The book of Ruth, like most of the Hebrew Bible (and some of the New Testament), shows no interest in the afterlife. Postmortem rewards and punishments are of no concern here. If Ruth et al. achieve immortality it is through their notable offspring. Salvation in this book is about having one's physical needs provided: food, shelter, security. An Old Testament professor of mine defined shalom as that state where "You have everything you need to live and be happy and I know it. And I have everything I need to live and be happy and you know it." The word shalom does not (to the best of my knowledge) occur in the book of Ruth, but that sense of mutual concern for each others' well-being seems to undergird the entire narrative.

If the Hebrew word shalom does not occur in Ruth, the word hesed certainly does. Hesed signifies something like "extravagant, faithful, merciful, kind, loving, loyalty." It is a rich concept and an important theme in this book. It is an attribute of God but also a human attribute modeled by Ruth in her treatment of Naomi, and Boaz in his treatment of Ruth. My imaginary community of faith would be a community of hesed.

Many faith groups stress God's sovereignty. The book of Ruth also recognizes that God is free to work weal or woe. Christians who emphasize sovereignty are usually monergistic, that is, they insist that God is the sole actor in the work of salvation. (My own Lutheran tradition tends this way). In the book of Ruth, human beings seem to have free will, and human agency is a factor in salvation. Ruth chose to accompany Naomi. Ruth took the initiative in her relationship with Boaz. As a result, Ruth assured her future and became the direct ancestor of both Israel's greatest king and, in the New Testament, the Messiah. I don't see monergism being a factor in a theology that put the book of Ruth at its center.

One last point, and it should almost go without saying, a faith community that used Ruth as its interpretive lens would be open toward outsiders.

My community based on the book of Ruth exists only in my imagination. Were it to be translated into a reality, it would be like any other faith community: imperfect. It would have features both good (a stess on hesed) and bad (dismpowerment of women). Perhaps real faith communities would benefit by adopting (or placing greater emphasis on) the good features of my hypothetical community.


What do you think? What features would a community that placed Ruth's story at the heart of its theology  have? Are there good features that your faith community would benefit from?
Posted by Brant Clements at 2:15 PM