THE YEAR OF BLOGGING BIBLICALLY: DAY 98 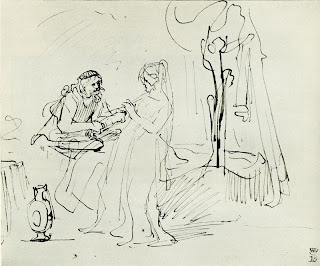 After the incident with Bathsheba things go rapidly downhill for David.

First his son, Amnon rapes half-sister Tamar. It is an ugly story. Strangely it is told mostly from the rapist's point-of-view. Amnon starts out loving Tamar, though this is no definition of love that I recognize. He tricks her to his bedside, rapes her, and then begins to hate her.

When Amnon starts to force himself on Tamar, she bargains with him. "Ask the king," she says, "and he will give you permission to marry me." It seems unlikely that this is true. She is simply trying to protect herself. To no avail.

After the rape comes the loathing. Amnon compounds Tamar's shame by throwing her out. She put ashes of mourning on her head and tears her rich robe.

Tamar has a tall, handsome full-brother with an impressive head of hair. His name is Absalom. Tamar goes to live in his house. Absalom bides his time.

When King David learns what Amnon has done, he is angry. That's as much as the Hebrew text says. The Septuagint makes clear what the Masoretic text implies: David does nothing. The Septuagint also adds a motive for David's inaction. He does not want to punish his firstborn. I will make a further presumption and say that Amnon was rightful heir to David's throne.

Two years later, Absalom makes his move. He kills Amnon and runs away.

Now three years pass and David is in Jerusalem pining for Absalom. In chapter 14, David's general Joab employs a ruse to convince David that Absalom should be brought back to Jerusalem. Although Absalom returns, David refuses to see him for another 2 years. Finally, the two are reunited. Tears are shed.

Absalom is not done yet. In chapter 15 he begins to actively solicit support from the Israelites. Relocating to Hebron, Absalom has himself declared king of that place and gathers an army. One of David's own advisers, Ahithophel the Giloniite, joins Absalom.

When Absalom and his army advance on Jerusalem, David flees with a retinue. Why David leaves Jerusalem is unclear. Was he afraid of a siege? Was he unwilling to fight his beloved son?

Though David escapes the city, he insists that the ark of the covenant remain there. He sends the priests back along with a friend, Hushai, who will act as his spy.

David has been forced to abandon his throne. As bad as this is, it will get worse. Sometimes it is hard to see the hand of God at work in these stories. Maybe the hand of God has nothing to do with the events of these chapters. Maybe these are simply stories of human depravity and the sorrow it causes.