THE YEAR OF BLOGGING BIBLICALLY: DAY 81

The judges Tola and Jair get brief mention in today's reading. Jair had 30 sons who rode 30 donkeys and ruled over 30 towns, an odd fact without much significance.

Verses 6-18 begin the story of Jephthah. If things have been going slowly downhill in the book of Judges, they take a precipitous decline with Jephthah.

To begin, YHWH is getting really tired of Israel's idolatrous infidelities. (Alliterate a lot?) Having given them up to the Philistines and Ammonites for 18 years, YHWH is reluctant to help until they destroy their idols.

Finally, YHWH sends Jephthah the Gileadite to rescue his fellow Israelites. Jephthah, as we learn in chapter 11, is the illegitimate son of a prostitute. Granted, this is not his fault but, in terms of the narrative at least, it reflects badly on his character. 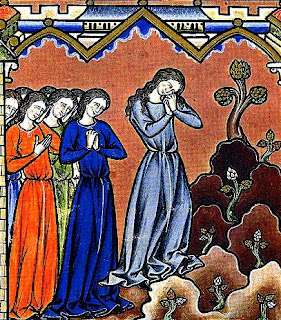 After a fruitless parlay with the Ammonite leaders, Jephthah leads Israel in a successful campaign against the enemy. Well and good, except that Jephthah has made a rash vow. Upon his return home he will offer as a sacrifice to YHWH the first thing to come through the door of his home. In a horrifying turn of events, that turns out to be his daughter, his beloved only child. There is nothing to be done. The vow must be kept. The girl is granted a short reprieve to go into the hills with her girlfriends and bewail her virginity.

Some commentators offer convoluted arguments that Jephthah does not actually kill his daughter. After all, she mourns her virginity not her death. And though the text says that Jephthah did with his daughter as he had vowed, it never says he killed her. So, the argument goes that she was not literally sacrificed, but instead lived like a nun for the rest of her life.

It seems to me a strained attempt to salvage Jepthah's reputation, and more importantly, YHWH's. 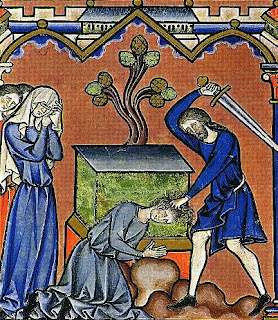 Jepthah's story continues in chapter 12. Back in chapter 8, Gideon used diplomacy to placate the Ephraimites when they were angry for not being called up to serve in battle. Now they are back leveling the same complaint against Jephthrah. Jephthrah lacks Gideon's diplomacy and fighting breaks out between Jephthrah's forces and the Ephraimites. It goes badly for the Ephraimites. Not only do they lose the battle, but Jephthrah does not allow them to retreat. Using the password "shibboleth" to identify the Ephraimites, the Gileadites kill 42,000 of them.

Things are not good among the Israelites.

Chapter 12 ends with mention of three more judges who get only brief write-ups: Ibzan, Elon, and Abdon.