THE YEAR OF BLOGGING BIBLICALLY: DAY 83 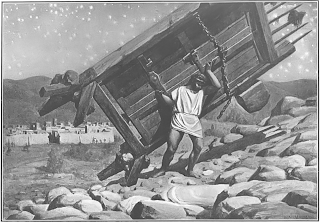 Nazirites vowed neither to consume grape products nor cut their hair. They did not vow to abstain from sex. Judges 16 concludes the story of Samson, a Nazirite from birth. The chapter begins with our hero dallying with a prostitute in Gaza. His enemies decide to attack him at dawn, but he fools them by leaving in the middle of the night. He takes their city gates with him and drops them on a hillside about 40 miles away. This leaves the city unprotected; it's citizens exposed.

Samson is the good guy in these stories but, as was the case with the Patriarchs, he is not a particularly good moral example. Some modern Christians strongly emphasize sexual purity. I'm sure that some of them also tell their children the story of Samson. It is, after all, a great, super-heroic story with lots of action and some humor. I'm guessing that most of them leave out the part about the prostitute.

Next we find Samson falling in love once more. This time the object of his affection is Delilah. It is probably safe to assume that she is a Philistine. It is certain that she is in cahoots with the Philistines who want to revenge themselves upon Samson. For a handsome sum of money, Delilah promises to learn the secret to Samson's strength. At first Samson toys with her, but, as he did with his Philistine wife, Samson finally succumbs to her cajoling. "It's my hair," he says. "Cut it off, and..."

And she cuts his hair off. the Philistines capture Samson easily, put out his eyes, and set him to work grinding grain in prison.

When his hair grows back, Samson regains his superhuman strength. When he is taken to the temple of the Philisitine god Dagon during a great feast, he topples the building killing everyone inside including himself. He is said to have killed more Philistines in his death than in his life. This is a suitable, tragic, heroic end for Samson.

Judges 15:20 said that Samson led Israel for 20 years "in the days of the Philisitines." That phrase is telling. For all his heroics, Samson never got his people out from under the oppressive thumb of the Philistines. The downward trend continues. 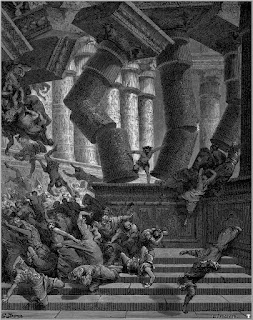 Chapter 17 tells the story of an Ephraimite named Micah who has a silver idol (of YHWH) made, put is in  a shrine, and makes one of his own sons a priest. A graven image, an unauthorized place of worship, a priest from outside the tribe of Levi, this is just all kinds of wrong. When Micah hires a real Levite to be his priest, it really doesn't improve matters. Micah, however, seems to think it will.

In chapter 18 a group of Danites (Samson's kin) are looking for land to settle. They send out spies who ask Micah's Levite if YHWH will favor their quest. The Levite assures them that all will be well. The text does not specify whether the Levite consulted YHWH. It seems unlikely that he did.

The Danites send a force of 600 men to take the city of Laish.They stop by Micah's place, commandeer his idol and take his Levite with them. They are successful in their war against Laish, take the city, settle themselves in the land. The Danites set up the purloined idol and establish their own alternative priesthood. This really is not good. 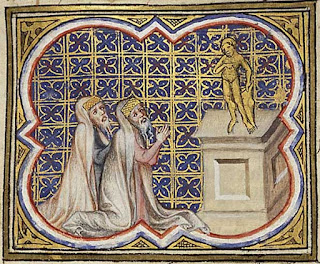