THE YEAR OF BLOGGING BIBLICALLY: DAY 90

YHWH rejected Saul in 1 Samuel 13. Because he had been faithless and offered sacrifices before Samuel arrived, Saul would not establish a dynasty. God would choose someone else to rule over Israel.

In Chapter 15, YHWH rejects Saul again. This time it is because Saul is faithless because he was supposed to utterly destroy the Amalekites, but did not. He allowed his troops to plunder the Amalekites' livestock. He takes the Amalekite king as a prisoner.

Saul has excuses. The plundered livestock was to be used as sacrifices. (Maybe they were). Saul was afraid of his men. (He has said this before. It's not the mark of a great leader). YHWH has no use for excuses. Samuel tells Saul that YHWH has rejected him. Samuel himself kills the Amalekite king. Then Samuel breaks ties with Saul. He will never speak to Saul again. At least not in this lifetime.

In Chapter 16 Samuel goes to Bethlehem and finds YHWH's choice for Saul's replacement in the house of a man named Jesse. After examining seven of Jesse's sons, and taking a pass on all of them, Samuel asks if there are any more sons hiding anywhere. There is one, the youngest, a handsome young man named David. He's out keeping the sheep. 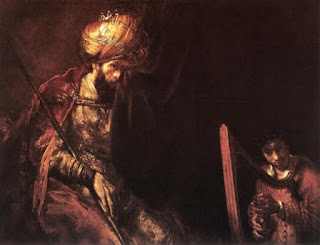 In verses 14-23, David is sent to live in Saul's household. It seems that Saul is troubled by "an evil spirit from God." I'm troubled that an evil spirit is said to be "from God."  But this is the problem with monotheism. There is only one God and that God is therefore responsible for everything, good and evil. At any rate, David is a harp player and his music is soothing to Saul. David is described as a valiant warrior in this passage.

Which makes the events of chapter 17 odd. In chapter 17, neither Saul nor his attendants know David. David is a young man, a shepherd once again, and not a skilled warrior. He is unaccustomed to wearing armor, not that Saul's armor would fit him anyway. Saul was a tall man.

At best, the stories in chapters 16 and 17 are out of order. Close reading shows that they are not really compatible. This, as well as repeated elements such as YHWH rejecting Saul twice, is further indication that 1 Samuel was made by compiling at least two sources.

The story of David and Goliath is a Sunday School classic. David is the young shepherd armed only with a sling shot and his faith. He goes up against, and defeats a fierce 9-1/2 foot tall giant. It's a thrilling story with some lovely touches of humor and just a dash of gore. 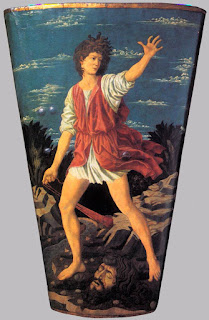