THE YEAR OF BLOGGING BIBLICALLY: DAY 96 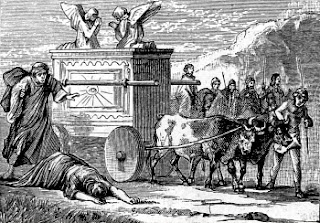 In order to make sense of the events in the first part of 2 Samuel 4, some translations follow the Septuagint. The Hebrew of the Masoretic Text is simply not clear. What is clear is that Saul's son Ishbaal (aka Ishbosheth) is assassinated by a pair of brothers named Rechab and Baanah.  They take the dead king's head to David expecting, I suppose, a reward of some kind.

Incidentally we are introduced to a grandson of Saul through Jonathan, a disabled boy named Mephibosheth. Elsewhere he is called Merib-baal.

David is no more kindly disposed toward the killers of his rival king than he was to the Amalekite who claimed to have killed Saul. Rechab and Baanah are executed, their bodies mutilated and displayed. David has Ishbaal's head buried in the tomb of Abner.

David attacks and conquers the city of Jerusalem. He makes it the capital of his united kingdom. It is called the "City of David."

I think it is safest to say that no one really knows. The parallel account in 1 Chronicles 11 doesn't mention the blind and lame at all.

2 Samuel 5:9 is the first mention of the "Millo." This was apparently some sort of structure in Jerusalem, possibly a stepped stone structure. Let's face it, this passage of 2 Samuel is full of mysteries.

The upshot is that David becomes a significant king. Neighboring king Hiram of Tyre builds David a palace. David acquires more wives, and some concubines, and has more children.

When Philistines attack, David's troops, with YHWH's help, rout them. The fleeing pagans drop their idols which the Israelites take as souvenirs of war. Through it all, David is faithful and humble before the Lord.

In chapter 6 David brings the ark of the covenant to Jerusalem, a savvy move that consolidates the seats of religious and political power in one place. The first attempt to move the ark is somewhat disastrous. A well-intentioned man named Uzzah touches the ark to keep it from falling and for his trouble is struck dead on the spot. YHWH has no need of your protection, thank you.

David, understandably unnerved, leaves the ark at the house of a man named Obed-edom. Obed-edom, who apparently does not touch the ark, prospers by its presence. So, David tries again to move it to Jerusalem. The procession is impressive. The attempt is successful. The only person unimpressed is Saul's daughter, Michal. She is not happy to see David dancing shamelessly wearing an ephod.

Michal, we are told, never has children. Either God or David, or both, were displeased with her. The end result is that the transfer of power from Saul's family to David's is complete.

In chapter 7 David proposes to build a "house" (i.e. a temple) for YHWH in Jerusalem. YHWH demurs and turns the tables promising to build a "house" (i.e. a dynasty) for David. David then offers a lengthy, and fascinating prayer. On the one hand he addresses YHWH as the only God: "There is no God beside you (v. 22)." On the other hand, his prayer seems to grant that the (lesser) gods of other nations have some reality: (v. 23). Is David or, more accurately, the author of 2 Samuel a monotheist or a henotheist?

There is also something interesting in David's use of YHWH's name, but that will be the subject of another blogpost.