THE YEAR OF BLOGGING BIBLICALLY: DAY 84

"Benjamin is a ravenous wolf
In the morning devouring the prey
And at evening dividing the plunder." (Genesis 49:27)

Those are the words with which Jacob, from his deathbed, "blessed" his youngest son. In the closing chapters of the book of Judges the tribe of Benjamin proves its rapacity and is nearly destroyed as a result.

There is a trajectory to this book. There are hints of trouble from the outset. The conquest of Canaan is incomplete. A pattern of apostasy, rejection, repentance, and restoration is set. The early judges like Ehud and Deborah are successful in leading Israel. Their stories are gruesome but end in victory. A steady downward momentum has begun, however. Gideon is a good guy, but winds up making an idol. With the story of Jepthah there is a sudden, precipitous drop. Jephthah is a formidable military leader, but he is also guilty of child sacrifice and lacks the diplomacy to prevent inter-tribal warfare. Things level out a little with Samson. He is a great hero in the mold of a Greek demi-god, but Israel languishes under Philisitine oppression throughout his career. After Samson the book of Judges goes completely off the rails. The story ends in chaos.

Chapter 19 brings us the story of a Levite and his concubine which has dark echoes of the destruction of Sodom in Genesis 19. The Levite, ironically, feared ill-treatment if he stayed in a non-Israelite town. So he puts up for the night in Gibeah, in Benjamin's territory. The men of Gibeah surround the house and demand that the Levite be given to them to be raped. This is not about sexual desire. It is about power. It is about humiliating the stranger. The Levite pushes his concubine out the door to the crowd who gang rape her through the night.

Compounding the horror of this story, the Levite takes her body home, dismembers it, and sends its pieces throughout the countryside for all of the tribes of Israel to see. 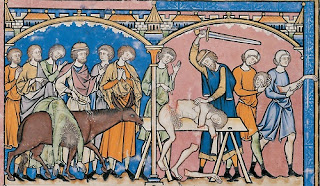 In chapter 20, at the instigation of the Levite, eleven of Israel's tribes go to war against one, Benjamin. Many of the Benjaminites are left-handed as Ehud was. The battles are fierce. The casualty counts are high. After three days of fighting, the Benjaminites are defeated with a tactic that Joshua used against the city of Ai (Joshua 8:1 ff). Only 600 Benjamites are left alive.

Chapter 21 concludes the book. The Israelites have sworn not to give their daughters in marriage to men of Benjamin. Unwilling to let the tribe die out, they figure out ways to provide marriage partners for the 600 men who remain. First, they go to war against the (Israelite) city of Jabesh Gilead, killing all of its men and women, but capturing 400 virgin girls for the Benjaminites. Then they allow the remaining 200 Benjaminite men to kidnap some of their own daughters. That way, at least, they didn't "give" their daughters to the Benjaminites.

This is what matters have come to in Israel.

Next: Ruth
Posted by Brant Clements at 12:00 AM