THE YEAR OF BLOGGING BIBLICALLY: DAY 91 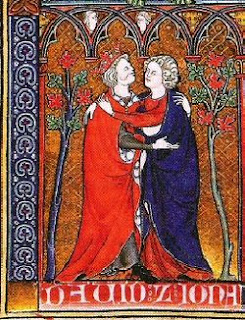 1 Samuel 18 tells us that Saul's son Jonathan loves David. Some people see homoerotic overtones in their relationship. I can see why. I'm not inclined to agree however. The Hebrew Bible's revulsion at gay sex and the high regard it has for David suggest to me that David and Jonathan have an intense, close friendship but not a sexual relationship.

Everybody loves David it seems. The women sing of his heroics, provoking Saul's anger. Twice (or is it three times?) in this section, Saul tries to run David through with a spear. Once would have been enough. The fact that the two accounts are so like one another suggest to me that they came from separate sources. Saul is a little spear happy anyway as he will also try to run Jonathan through.

On the subject of those who love David, Saul's daughter Michal falls for our ruddy young hero. David protests that he isn't fit to be the king's son-in-law, so Saul sets him a task. The bride price for Michal is 100 Philistine foreskins. Since living Philistines are unlikely to give up their foreskins willingly David will have to kill a few men. Saul hopes that David will die trying but David manages to double the number of foreskins Saul requested. Or does he?  The Hebrew of 1 Samuel 18:27 says "two hundred foreskins" but the Septuagint says "one hundred." At 2 Samuel 3:14 David says that he paid "one hundred foreskins" for Michal.

Either way it's a lot of foreskins. David is a great warrior. He marries Michal.

In chapter 19 Jonathan convinces his father not to kill David. At least temporarily. Michal helps David escape from Saul by a ruse involving an idol and some goat's hair. Why she had an idol is not explained. Then yet another explanation is given for the proverbial saying, "Is Saul also among the prophets?"

Chapter 20 tells how Jonathan and David conspire to learn Saul's intention toward David. There have been hints all along that Saul wanted to kill David: the fact that he sent David out to kill 100 Philistines, that he tried to run David through with a spear two or three times, and the fact that he talked to Jonathan and anyone else who would listen about killing David are good examples. Still, one cannot be too sure. So, Jonathan tests his father out. He determines that Saul means David no good. So, even though it means he will never  be king himself, Jonathan makes a covenant with David and sends him on his way.

I used to work at a home for troubled youth. Some of them could swear like sailors. Occasionally one of them would say, "Pardon my language, Rev." To which I would reply that they could use any language they wanted as long as it was in the Bible. Most of them had no idea how much latitude that gave them.

In 1 Samuel 20:30 Saul angrily calls Jonathan the "son of a perverse, rebellious woman." Ken Taylor's Living Bible (1971) paraphrased that as "son of a bitch." Not the most accurate rendering perhaps, but it seems to catch the spirit of the thing.