THE YEAR OF BLOGGING BIBLICALLY: DAY 89 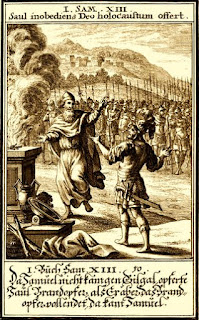 Reading the story of King Saul highlights the fact that 1 Samuel must have been cobbled together from a variety of sources. Events happen out of order. Things don't always make clear sense.

Chapters 13 and 14 depict Saul as weak and faithless from the beginning of his kingship. Though he has been told to wait for Samuel, Saul grows impatient and fearful. He offers a sacrifice without the aid of a legitimate priest. This displeases YHWH. Saul's son Jonathan is a faithful man and a strong warrior, but, because of Saul's faithlessness  Jonathan will never sit on the throne. Saul will not establish a dynasty.

The Philistines are in charge over Israel. As a measure of control, the Philistines do not allow the Israelites to have blacksmiths. No smiths means no bladed weapons. Saul and Jonathan, somehow, have swords.

In chapter 14, Jonathan slips away from the cowering army in company with a priest and his armor bearer. He goes up against the Philistines and, with the help of YHWH, kills 20 of them. The Philistine camp is then thrown into confusion and the Philistines turn on themselves.

The story of Saul's "rash oath" in chapter 14 echoes the story of Jephthah's vow in Judges 11, though the results are happier. Saul has his troops vow to fast until sunset on a day of battle. Jonathan, unaware of the vow, eats a little honey. At sunset, the famished troops eat meat with the blood still in it, a big no-no in Genesis 9:4, etc. Saul stops them, but then has to deal with the problem that someone among his troops broke the fast. When it turns out to be Jonathan he, like Jephthah's daughter, is  prepared to face the consequence of death. The troops won't hear of it, however, and they ransom him, apparently with an animal sacrifice.

At the end of chapter 14 we are introduced to Saul's family. We are told that Saul is successful in war, but the Philistines remain a problem throughout his reign.