THE YEAR OF BLOGGING BIBLICALLY: DAY 88 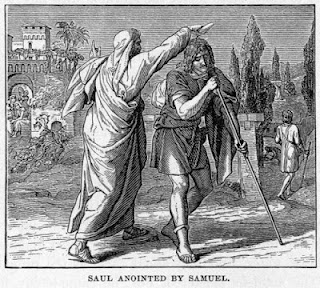 Remember the trope? There is a conventional formula that comes into play when certain biblical characters get married. We saw it in Genesis 24 (Isaac and Rebekah) and Genesis 28 (Jacob and Rachel...and Leah). The trope goes like this:

The hero leaves home to find a wife.

He meets a woman at well.

A marriage contract is made.

It's not much of a plot, but neither is "Boy meets girl. Boy loses girl. Boy finds girl." It is the variations in the trope that make it interesting and tell us something about the heroes.

In 1 Samuel 9, we get another variation on the trope. This time the hero is Saul (his name means "prayed for") who will become Israel's first king. He is tall and handsome. He goes out from his father's house in search of...

Already the standard plot is being subverted.

After some searching, Saul does come to a well where he meets not just one woman but a bevy of them.  This seems promising. Saul asks the women for directions to the house of a seer. No one draws water. No marriage contract is made. Saul doesn't even find the donkeys. What's wrong here?

Actually this sets the tone for Saul's entire kingship. Overall he will be a failure. He will not establish a dynasty. He will die by suicide. Preemption, disappointment, and subverted expectations are the hallmarks of Saul's story.

The seer he was looking for turns out to be Samuel who has already heard from YHWH that he is to anoint Saul to be king. Keep in mind that YHWH was not real keen on the idea of Israel having a king in the first place. YHWH wants to be Israel's king.

In chapter 10 Samuel anoints Saul and gives him certain signs to watch for. One of those signs is that he will meet a bunch of prophets and, overcome by YHWH's spirit, begin to prophesy himself. This is the first explanation for a proverb that must have been current among the Israelites, "Is Saul also among the prophets?" Frankly, I'd like to revive the proverb but have never found an occasion to which it applies.

Samuel tells Saul to go to Gilgal and wait there. Samuel will be along in a week.

On the day of Saul's ascension to the throne he is, unaccountably, hiding among the baggage. This is another foreshadowing of failures to come. After the coronation, Saul goes home to Gibeah. There are grumblers who complain that Saul is not fit to rule. Saul ignores them.

Chapter 11 tells how an army of Ammonites besieged a city called Jabesh. The Ammonite ruler offers terms of peace. "Just let me gouge out all of your right eyes." The people of Jabesh say, "Let us think about it."

When Saul learns of the situation, he cuts up an ox and sends its various parts throughout Israel. Was this a way that armies were mustered in ancient Israel? It is reminiscent of the Levite who butchered his concubine and sent her parts out to the tribes of Israel, also to gather a fighting force, in Judges 19. Saul pronounces a curse against those who will not come to join the battle. "May the same thing happen to their cattle."

After the Ammonites are defeated, Saul forgives those who grumbled against his kingship. In the long run he may be a failure but right now he is victorious and magnanimous. His kingship is renewed with a party.

Chapter 12 is taken up with Samuel's farewell speech. Like Moses and Joshua before him, Samuel reminds the Israelites of what God has done for them and encourages them to be faithful to YHWH. Idols are verboten. This king thing was not such a great idea, but it will be okay, Samuel says, as long everybody worships YHWH.

It is a little odd to have a farewell speech from a man who will continue to be a major player in events to come.