THE YEAR OF BLOGGING BIBLICALLY: DAY 93

Samuel dies. It is announced simply in 1 Samuel 25:1. He is buried and mourned. David moves.

There is an ancient tradition that says Samuel wrote the books bearing his name. Somehow, it seems unlikely.

Some years ago, I read the diary of a 19th century government surveyor who was sent out to map Utah. When one of the locals refused him hospitality, he referred to the man as a "surly Nabal." I wondered then, and I still do, how many of his contemporary readers understood the reference. Surely it was more widely understood at the time than it would be today. I think that people were more biblically literate back then.

Nabal (the NIV helpfully explains that the name means "fool") received kindness from David and his troops. When David sends his men to request food and drink from Nabal, the man refuses. David is ready to destroy Nabal and his household, but Nabal's wife, Abigail, diplomatically assuages David's anger. The next day, when Nabal learns the news, he is apparently struck with paralysis. Ten days later he dies. Abigail marries David. 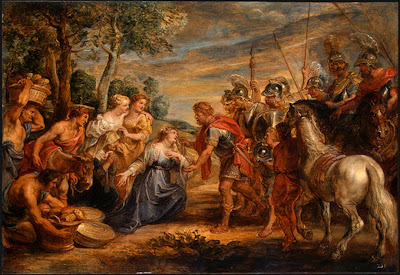 David also marries another woman named Ahinoam. His first wife, Michal, who loved him, was given by her father to be the wife of another man, Palti of Laish.

In chapter 26, Saul is once more pursuing David with the intent to kill him. David has the opportunity to kill Saul again but instead steals Saul's spear and water jar. Retreating to a safe distance, David calls out to Saul's general Abner. He deprecates himself as a "flea" this time. (It was a dog in chapter 24). David professes his allegiance to Saul, "YHWH's anointed." Saul blesses David. This story is like the episode in chapter 24 in so many of its details that it must almost certainly be a variant of the same tradition collected from a different source.

In chapter 27 David wants to live where Saul will not pursue him, so he moves to the Philistine city of Gath. Last time he was there he drooled and scrawled and feigned madness (21:10 ff.).  This time out he employs no such ruse. He is given the city of Ziklag to live in. From there he runs raids against Israel's enemies, though he lies to Achish, king of Moab, claiming to be raiding Israelite cities instead. Tricky!

David will do far worse. Adultery and murder are on the far horizon.

Once again we find God's hero to be a morally ambiguous sort. Let's just call David a sinner, shall we? I find it comforting that God chooses sinners and uses them, for all their flaws, in the service of God's will. It is from the line of David that Jesus will eventuallybe born.