THE YEAR OF BLOGGING BIBLICALLY: DAY 97 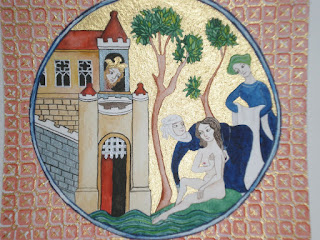 YHWH is just nuts about David. So is everyone else it seems with the sole exception being his first wife, Michal. The bloom had gone off love's rose for those two. King David is loyal to his predecessor and to his God. He is great in battle, generous in victory, and a stranger to defeat. If I were to make a movie about him, I would title it There's Something About David. A sitcom would be Everybody Loves David. It seems that he can do no wrong. Even his white lies to the priest Ahimelek were somehow endearing.

If you would like to maintain that view of David, don't read any further in 2 Samuel. Read the books of Chronicles instead. There, any flaws in David's character are whitewashed over or conveniently ignored. Here in 2 Samuel things are about to get ugly.

Chapter 8 gives an overview of some of David's victories in war. Some of the nasty details of ancient warfare are recounted, but these do not reflect badly on David. He's just a natural at winning. Israel's enemies go down like bowling pins. The chapter ends with a list of some of the officials of David's court.

In chapter 9 David seeks out a descendant of Saul's with the object of bestowing honor and kindness. He finds the disabled grandson Mephibosheth and makes him a part of his own household. Reading between the lines, this kindness also keeps a legitimate claimant to Saul's throne in check.

It is in 2 Samuel 11 that the Lord's fair-haired boy goes astray. He should go off to war. That's what kings did in the spring. Instead he stayed home and dallied with Bathsheba, the wife of Uriah the Hittite.  When Bathsheba becomes pregnant, David tries to cover up his infidelity by bringing Uriah home. Uriah, loyal to his troops, will not sleep with his wife. So David sends Uriah back to the front carrying sealed orders that will put him in a position for the enemy will kill him.

I wonder if David had begun to believe his own press? Maybe he, too, thought that he could do no wrong. "But the thing David had done displeased YHWH."

The prophet Nathan, in chapter 12, tells a clever story that makes the king face his own guiltiness. David repents. Still, sin has consequences. The child born to Bathsheba dies. This is one of those moments in Scripture that makes me shake my head. There is a gross injustice here. A newborn baby suffers for 7 days and dies because his father sinned.

I remind myself that Jesus rejected the idea that children suffer for their parents' sins (John 9). I also keep in mind that this story is not about the child, nor about the child's mother. The baby is not given a name, as far as we know. Bathsheba is mentioned but only as "the wife of Uriah." The focus in this story is on David, his sin, his repentance, and his acceptance of God's will.

So, David has feet* of clay. In spite of his sins and shortcomings, he is remembered as Israel's greatest king and the direct ancestor of Jesus who is called the Christ.

*Do I need to remind you of what feet mean in the Old Testament.