THE YEAR OF BLOGGING BIBLICALLY: DAY 95

The two books of Samuel were originally a single work. Well, that's not exactly right. Most likely they were originally several works that were compiled into a single work. When the resulting Hebrew book of Samuel was translated into Greek it was divided into two parts. I don't know why. The division stuck and we now have First and Second Samuel. The point is, they are really one book.

The same is true of 1 and 2 Kings, and 1 and 2 Chronicles. In the New Testament things are a little different. First, Second and Third John (for example) are three separate letters by the same author. First and Second Corinthians are separate letters of Paul to the same congregation. It's a little more complicated than that. It always is, but that's accurate enough for now.

Anyway, 2 Samuel picks up right where 1 Samuel left off. Saul and his sons have died in battle against the Amalekites. David is back in the presumably ruined city of Ziklag. A young man, an Amalekite, comes to David from the battlefield to inform him of the death of Saul and Jonathan. He tells a story that differs significantly from the account we've just read. Rather than assume that the discrepancies once more indicate the use of different sources, we are probably supposed to think that the young man is lying. He claims to have killed Saul.

Why lie? He probably hopes to ingratiate himself to David by taking responsibility for the death of David's enemy. David sees things differently. In spite of Saul's murderous intentions toward David, David has repeatedly sworn allegiance to Saul, "YHWH's anointed." I assume that David believed the Amalekite man's lie. It doesn't matter either way. David has the man put to death.

The body count in today's chapters is high.

David has the reputatation of being a musician and a poet. He was hired to play the harp to soothe Saul's troubled spirit. In 2 Samuel 19-27, we find the first instance of his singing. He composes a lament for the deaths of Saul and Jonathan, praising them as skilled warriors. David uses the image of discarded weapons on the field of battle to good effect. The song is bracketed by the phrase "How the mighty have fallen!"

David's song is also said to be recorded in the "Book of Jashar." We came across another reference to this lost book back in Joshua 10:13.

In chapter 2 David, relocates to Hebron wehre he is anointed king of Judah. (David is himself a Judahite). He also sends gifts to the men of Jabesh Gilead who had recovered and buried the body of Saul. David is beginning to build political alliances. He will need them.

Abner, the general of Saul's army, installs one of Saul's remaining sons, Ish-bosheth (a.k.a. Ishbaal*), as king over the rest of Israel's tribes. Abner, it seems, is the power behind the throne. As Bugs Bunny would say, "Of course you know this means war." Two armies mass at Gibeon.

Joab is the general of David's army and will prove to be a staunch defender of his king. His two brothers, Asahel and Abishai, are with him at Gibeon as he faces off against Abner. The battle begins with a strange scene of ritual combat. Twelve soldiers from each army go up against one another. Paired off to fight, all 24 die at the hand of their opponents. The symbolism of Israel's 12 tribes in suicidal civil war is clear. 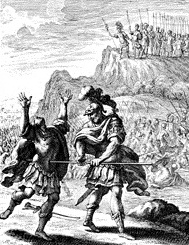 After the ritual combat, general warfare begins. By a clever maneuver, Abner kills the pursuing Asahel. Joab and Abishai then pursue Abner, but Abner, evoking the image of an endless war of Israelite against Israelite, convinces them to back off. The battle of Gibeon ends with Abner's army having suffered the heavier losses. Everyone seems anxious to leave the area.

Chapter 3 begins with notice that the battle of Gibeon was only the beginning of a protracted war between David and Ish-bosheth. David's power grows while Ish-bosheth's diminishes.

A side note indicates that David, once a rebel leader with 2 wives, has become a king with six sons by as many wives. Note the name of Absalom, with two royal parents. He will become important later.

Ish-bosheth accuses his general, Abner, of cuckolding him. This is a serious accusation. Sleeping with a king's wife is a way of proclaiming one's power over that king. This will come up again in the story of Absalom. Abner is offended by the accusation and approaches David, offering to come over to his side. David is willing but has one demand, "Bring me back my first wife, Michal." With Ish-bosheth's help, Abner restores Michal to David. Michal's second husband is not to happy about this, but he is powerless against Abner.

No one bothered to ask Michal how she felt about it.

David receives Abner with a feast. When Abner leaves, Joab, still angry over the death of his brother, has Abner brought back to Hebron and kills him. David pronounces a curse on Joab's family and then sings a lament for Abner. This is the second time we've "heard" David sing.

*Baal, meaning something like "Lord," was a general designation for a god. Since it was also the name of a Canaanite deity, it was probably dropped from the compound name Ishbaal, which was replaced with the name Ish-bosheth.