THE YEAR OF BLOGGING BIBLICALLY: DAY 85 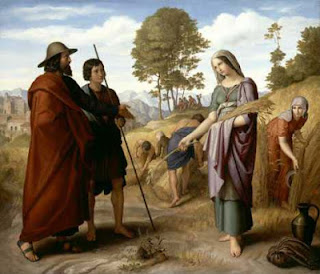 The book of Ruth is one of two biblical books named for women (the other being Esther) and, if I'm not mistaken, it is the only book of the Hebrew Bible named for a gentile. Ruth was a native of Moab.

According to the book of Genesis, the Moabites are cousins to the Israelites. They were the children (by an incestuous relationship) of Lot, the nephew of Abraham. Deuteronomy 23 specifies that "no Moabite shall be admitted to the assembly of the Lord to the tenth generation." In Numbers 25 Israelite men having sex with Moabite women is frowned upon--it could lead to idolatry.

Which is to say, that from an Israelite point of view, being a Moabite was not a desirable thing.

In Christian Bibles the book of Ruth is sandwiched between Judges and 1 Samuel. It fits there because Ruth is set in the time of the judges, but it interrupts the narrative flow that connects Judges and 1 Samuel.  Hebrew Bibles place Ruth in the third division of the Jewish Scriptures, the Kethuvim (Writings).

The book of Ruth is clearly written after the events it narrates. How long after is a matter of scholarly debate. Verse 1:1 sets the narrative in the past. The genealogy in 4:13-22 traces the line of King David, Ruth's great-great-grandson. A custom involving handing a person a sandal to confirm a land transaction is explained in 4:7 as something done in former times.

I find it interesting that God plays a such small role in the book of Ruth.  The name of YHWH is invoked frequently. YHWH is said to have ended the famine (1:6) and to have dealt harshly with Naomi (1:20), but there isn't a lot of direct intervention in this book. YHWH's law (permitting gleaning, commanding levirate marriage) carries the day and brings about the story's happy conclusion.

The names of the characters in this book are symbolic. Mahlon means "sick" and Chilion means "failing." These two die just five verses into the first chapter. Their father's name, Elimelech, means "God is king" and is fitting for the book's premonarchical setting. Naomi means "pleasant" but when she falls on hard times she renames herself Mara, meaning "bitter." Orpah's name means "the back of the neck;" she turns away from Naomi. Ruth, on the other hand, means "friend" and she proves a true friend to her mother-in-law. Finally the name Boaz means something like "in him is strength."

This use of names leads me to think that the book of Ruth is a work of  historical fiction. That does not mean that all of the characters and events in the story are fictional. Even Abraham Lincoln, Vampire Hunter includes historical people and events.

To me the book's message is more interesting than its genre. Whether the book of Ruth is a factual account of historical events or, as I think, largely a work of fiction, the story has been written and preserved for a reason. What is the author trying to tell us?

One take-away from the story is the value of hesed,  a Hebrew word meaning faithfulness, loyalty, mercy and "lovingkindness" (as the good old King James Version translated it). Hesed  is an attribute of God in the Hebrew Bible. In this book Ruth shows hesed to Naomi. Naomi shows hesed to her God and her people. Boaz  shows hesed  to Ruth and Naomi. It can be said that YHWH, offstage, shows hesed to all.

Another message to glean* from this book is the inclusion of Gentiles among God's people. Some of the Old Testament Scriptures (e.g. Ezra and Nehemiah) are exclusivistic; other writings (e.g. Jonah, Isaiah) tend toward inclusiveness. Ruth is among the latter. A Moabite woman is the direct ancestor of Israel's greatest king. I guess that thing about Moabites being excluded from the assembly "to the tenth generation" doesn't apply here.

The genealogy in Matthew 1 includes the names of four women as direct ancestors of Jesus. Ruth is among them. 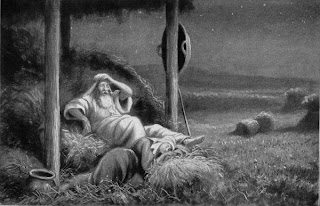 By the way, I'm not sure what happened on the threshing floor when Ruth got dolled up and laid down by Boaz's feet, but I can't help but remember that "feet" is a Hebrew euphemism for "genitals." Hmmm...