THE YEAR OF BLOGGING BIBLICALLY: DAY 82 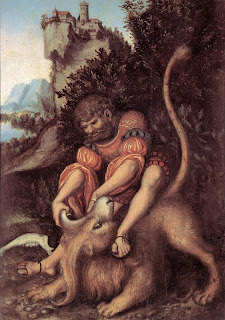 Samson gets more press in the book of Judges than any of Israel's other leaders. He is the only judge for whom we have an origin story. Like Isaac, Joseph, Samuel, and John the Baptist, Samson is born to a woman who was thought to be "barren." An angel fortells Samson's birth to his mother, the otherwise nameless wife of Manoah. Manoah comes off as a bit of a dope in this story. Like father, like son.

In the previous paragraph I used the phrase "origin story" intentionally. Samson is a lot like a comic book superhero, or perhaps a Greek demi-god. He is a nazirite from the womb. Remember the nazirites from back in Numbers 6? They were people who took special, temporary vows. They didn't consume grape products or get haircuts. In Samson's case, the vows were made for him and they weren't temporary.

Samson is possessed of superhuman strength. His hair is his Achilles' heel. An affection for Philistine women is his weakness.

Samson is fond of riddles, though I don't think he's especially good at them.

In chapter 14 Samson kills a lion, tearing it apart with his bare hands. Later he finds that bees have taken up residence in the lion's carcass and he eats the honey they have made. Samson marries a Philistine woman. At the wedding party, he poses a riddle to his 30 Philistine groomsmen. "Out of the eater, something to eat. Out of the strong, something sweet." The answer, the honey from a lion's carcass, should be unguessable. The groomsmen threaten the bride. The bride cajoles Samson. Samson reveals the answer to the riddle. He just can't resist Philistine women. The groomsmen win the bet and Samson has to pay them 30 suits of clothes.

Samson is not happy. He makes a rather rude accusation against the groomsmen and his bride. "If you hadn't plowed with my heifer, you would not have solved my riddle."

Paying off the bet is only a small inconvenience. Samson just goes to Ashkelon, kills 30 men and strips the corpses to get the 30 sets of clothes. Still angry, Samson goes home. His wife is married off to another man.

In chapter 15, when Samson tries to collect his bride, he learns that she has been given to another man. He takes revenge on the Philistines by capturing 300 foxes, tying pairs of them together by the tail, affixing a burning torch to each pair of foxes, and setting them loose in the Philistines' fields, thus destroying their crops.

When the Philistines come for Samson, the spirit of YHWH comes over him. He hulks out and kills a thousand of them with a donkey's jawbone. Back in chapter 3 we met Shamgar who killed 600 Philistines with an oxgoad. Some of these judges were just plain good with makeshift weaponry.

YHWH takes good care of Samson, even providing him with a spring of water to drink when he is thirsty. Shades of Moses!