THE YEAR OF BLOGGING BIBLICALLY: DAY 92 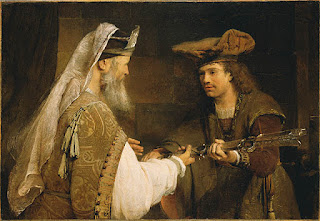 David is on the lam. King Saul wants to kill him. First thing, he runs to a place called Nob where the Tabernacle must currently be set up. He lies to the priest, Ahimelec,h and is given the sacred bread which is presented before YHWH. Only the priests are supposed to eat this bread. David is not a priest. He also claims that the men with him (are there men with him?) are ritually clean. This may or may not be strictly true. No matter. Ahimelech provides him with food and a weapon, the sword of the giant Goliath. That sword was kept behind an ephod which, in this case seems not to be a garment. What was it?

In Mark 2:26, Jesus refers to this episode. He uses it as a proof text for a kind of situation ethics. If David could eat the sacred bread, his disciples can pick grain for food on the Sabbath.  Jesus seems pretty sure that David had companions with him, though he seems to get the name of the priest wrong. He says that this event took place "when Abiathar was high priest." If Abiathar is high priest at this time, 1 Samuel doesn't mention the fact. Ahimelech is the priest on duty.

Saul's chief shepherd, Doeg the Edomite, happens to be at Nob. He sees David and Ahimelech.

With his ill-gotten provisions, David runs off to Goliath's hometown, Gath. The people of Gath are afraid of him. To protect himself, David pretends to be a madman. According to their king, Achish, Gath has enough madmen. David is sent on his way.

The books of Samuel give us a complex, morally ambiguous portrait of David, Israel's greatest king. For some reason, though, YHWH just loves this guy. Everybody loves David. Everybody but Saul. If you prefer a sanitized version of David's story read the Chronicles.

In chapter 22, David goes to hide out in a cave. His family joins him there. Then come the debtors, the distressed, and the discontented. Pretty soon David has a rebel army of about 400 men. He drops his parents off in a Moabite town and then, at the advice of a prophet named Gad, moves on.

In the meantime Saul, still wanting David dead, learns from Doeg the Edomite that David has been in Nob. He sends for Ahimelech and the priests of Nob. He has them killed, along with their families, and then destroys their city. Only one priest escapes, the aforementioned Abiathar, who runs off to join David's rebel band.

In chapter 23, Philistines attack a town called Keilah. With the Lord's blessing, David takes his army, now swollen to 600 troops, and routs the Philistines. Learning that David is in Keilah, Saul plans to besiege the city. David, with Abiathar's help, consults YHWH by means of the ephod, whatever that is, and leaves Keilah before Saul can arrive.

David retreats to the wilderness of Ziph. There is a doublet of the covenant of faithfulness that Jonathan and David made. The Ziphites betray David's whereabouts to Saul. Saul goes after David but is distracted from his goal by a timely Philistine invasion.

In chapter 24, Saul goes after David once more. In the wilderness of En-Gedi, David and his army are hiding in a cave. Saul, unaware of their presence, comes in to relieve himself. (If you haven't noticed there is a fair amount of scatology in both testaments of the Christian Bible). David could kill Saul, but doesn't. Instead he stealthily cuts a piece from Saul's robe. When Saul leaves the cave, David reveals himself and shows what he has done. David denigrates himself ("I'm just a dead dog") and swears allegiance to Saul. Saul weeps and blesses David. "I know that you will be king," he says. "Just be nice to my descendants."

And Saul goes home and all is well until the next time David spares his life. Doublets, doublets. Signs of compilation from multiple sources. 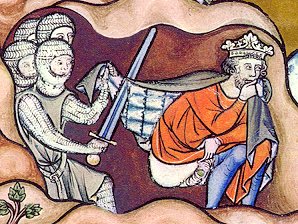